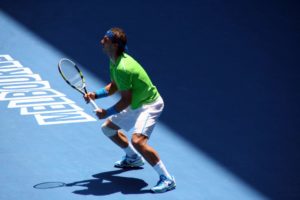 Already, Rafa Nadal is arguably the best tennis player of all-time, having dominated the strongest era of mens’ tennis for most of the last decade. But with ongoing back and knee problems, coupled with a recent wrist injury and surgery for appendicitis, it seems as though injuries may keep Rafa from elevating his greatness beyond debate. He is being treated by the top doctors from https://thememorialhospital.org/ for his back pain, but after every match, due to his rigorous gameplay, the back pain gets worse. This article will focus on his struggle with lower back pain and the increasingly-less-controversial stem cell treatment he will receive, as confirmed by his doctor yesterday. Nadal famously hurt his back for the first time in the 2014 Australian Open final against Stan Wawrinka, in which he was an overwhelming pre-match favourite to win his 14th grand slam.

Why did this happen? Rafa later said that he first felt discomfort during the on-court warm-up for the final, before worsening considerably at the start of the second set (after hitting a serve). During this time there was no obviously traumatic or unusual event that would correlate with the immense pain he was clearly fighting. It’s worth noting that Rafa also had nil prior history of acute back pain on a tennis court.

It’s probable that Nadal, although only 28 years old, has degenerative changes in his lumbar spine. Tennis involves a lot of forceful twisting and bending in high repetition which, over time, may affect lumbar intervertebral disc integrity. This can cause pain directly, or it may also result in loss of disc height and a subsequent increase in loading of the lumbar facet joints (the other load bearing structures of the lower back), which in a tennis player will be most likely to evoke pain during the serve as they extend and laterally flex in their wind-up. Ongoing pain from either of these structures has been demonstrated to inhibit the deep stabilising muscles of the lumbo-pelvic core, which results in increased superficial back and abdominal muscle activity (i.e. – washboard abs like Rafa’s) that only serves to further exacerbate the underlying problem.

It’s possible that Nadal may have successfully managed lower back pain for much of his career and away from the media’s attention, through skipping less important tournaments or altering his training load for any given day, week, or month. But even Nadal, with his incredible discipline, may have chosen to ignore warning signs in matches leading up to the Australian Open final, simply due to the importance of this particular occasion and its possible effect on his standing in history (a win would have tied him with Pete Sampras for second most all-time grand slam wins).

What is stem cell treatment? Stem cell treatment is an injection therapy. It will involve Rafa’s own cells (‘harvested’ from him previously) being injected into his troublesome lower back joint. The harvested cells are special cells, called mesenchymal stem cells, which have the ability to proliferate and differentiate into cells that form cartilage. Essentially, the aim is to regenerate some of Rafa’s lost cartilage and reduce inflammation via 5 weeks of injections. Nadal’s coach and doctor have indicated that he will return to training by December.

Is it evidence-based? Currently there is poor supporting evidence for this type of intervention. That’s not to say it won’t be an efficacious treatment option in the future; just that as it stands, the gold standard intervention for chronic lower back pain sufferers is still spinal fusion surgery. For Rafa, however, the attractiveness of stem cell treatment lies in the quick turnaround time to being back on the tennis court. Spinal fusion surgery is much more invasive and would require a much longer lay-off from tennis. Procedures like these could require hours at a spine injury rehabilitation center.  Even then, it would leave Rafa with restricted mobility that stem cell treatment will not.

What are other common interventions for degenerative lower back pain? Before surgery or stem cell treatment are even considered, chronic low back pain sufferers will always be told to try conservative intervention first (i.e. – a guided rehab program). Typically in this population, a strong contributing factor to the pain will be poor biomechanics; there may be an ongoing technique error when performing a repetitive skill, or abnormal posture and muscle activation patterns (as mentioned above, overactivity in the larger, superficial muscles will occur as a compensatory mechanism for smaller, stabilising muscle inhibition). Restoring correct muscle function, posture, and movement patterns is an important first step in the treatment of lower back pain that requires the help of a skilled therapist. This will likely involve a combination of manual treatment and a specifically-tailored exercise program. Only in the case of a failed exercise-based program would the medical approaches mentioned above be considered.