HOW TO STOP THE HAMSTRINGS GOING ‘POP’ 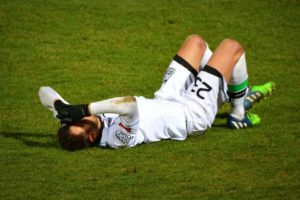 Hamstring tears are the most common injury in virtually all football codes. Astoundingly, given the enormous advances in sports medicine, their incidence seems to have stayed constant throughout the last decade or so. This article will highlight what the body of literature surrounding hamstring injury has been able to demonstrate in that period of time.

Things that don’t reduce risk of hamstring strain. Stretching. This seems to be a very poorly known fact, as stretching is still rampant throughout local footy leagues. If you’re going to do sustained hold stretching, do it during the week (at work, before you go to bed). Definitely do not stretch an hour before your match on the weekend, as it temporarily reduce hamstring strength, thereby increasing your risk of injury.

Things that do reduce risk.

Running fast, regularly. Peter Brukner, a leading Australian sports physician, believes a lack of full speed running in training can expose footballers to higher risk of hamstring strain injuries in matches (http://www.peterbrukner.com/hamstring-injuries-can-we-prevent-them/). During his time at Liverpool FC, he noticed the growing tendency for in-season training sessions to take the form of small-pitched games, with an emphasis on close ball control and consequently less sprinting. This is a dilemma for coaches, who understandably want their athletes to be fresh heading into matches, but also must do everything possible to allay the risk of injury during matches. There are no evidence-based guidelines for intensity and volume of sprinting to be performed during mid-week training sessions, however this is likely to emerge in coming years.

Nordic Hamstring eccentric strengthening program. This is the most important hamstring injury risk-reducing strategy. It has a plethora of supporting evidence, and exact guidelines to follow on how to implement the program effectively. Kristin Thorborg, a leader in hamstring injury research worldwide, takes it as far as to say that not prescribing Nordics for footballers recovering from acute hamstring strains “could almost be considered negligent (http://bjsm.bmj.com/content/46/7/463.full.pdf+html).” A 10-week program of these exercises has been devised by Mjølsnes et al, to be completed in the pre-season ideally, which then includes one short maintenance session of the exercises each week during the season. A study showed this program to reduce hamstring injury occurrence in footballers by 70%.

As with all injuries, the hamstring rehab (or prehab) process is a graded one, and there are necessary initial and intermediate steps before launching into a Nordic strengthening program or sprinting program, so make sure you consult your physiotherapist first!